The Noblest Religious Activity of Buddhists 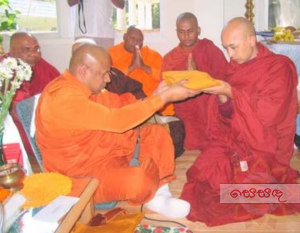 Vap Full Moon Poya day is a significant day for Buddhists because of the Katina Pinkama as well several other events which took place on this day. Gauthama Buddha’s completion of His Vas period in Thusitha heaven, the dispatching of an envoy by king Devanampiyatissa to emperor Asoka in India requesting him to send a sapling of Sri Maha Bodhi to Sri Lanka, the attainment of arahantship by Aritta Samanera as Singala Maha Thera and the recitation of Vinaya Pitaka under the supervision of Aranhant Mahinda Maha Thera are the significant events to have taken place on Vap Full Moon Poya day.

Buddhist monks complete the Vassana kala or the rainy season sojourn on Vap Full Moon Poya Day. This three month period is very important for ‘Savanak Piris’ or four groups of the Buddhist community viz. “Bhikkhus” –monks, “Bhikkhunis” nuns, “Upasaka“–lay male devotees, “Upasika” lay female devotees, because this is the period of the year when they can accumulate merit in various ways. Buddhists perform a series of special religious activities; the most important of them is the Katina Cheevara pooja or offering of robes to the Maha Sangha.

Katina Cheevaraya is a web of cloth made in a day and presented to a Buddhist priest. An important incident led to the introduction of Katina Pooja or offering of robes to monks who had completed vas or rainy season sojourn When Gauthama Buddha was sojourning in Srawasthi Jethawanaramaya thirty monks came to see Him from Paweyya state. Since it was the rainy season they remained with house holders in Saketha Nuwara and at the end of the three month Vas period they set off for Jethawanaramaya but on their way they got caught to heavy rains as the rainy season had not finished. They came to Jethawanaramaya in wet robes. On inquiries they told Buddha that they got caught to the rain. Buddha gave them permission for “Katinaskaranaya”or entitled them to have another robe.

Katina Puja or offering of new robes to Buddhist priest is long standing religious custom prevailing in all the countries where Theravadhi Buddhism prevails. Katina is offered to Buddha on the Vap full moon poya day and in Sri Lanka Katina pinkama ceremonies are performed in Buddhist temples during the period from Vap full moon poya day to Ill Full Moon Poya day. In the words of Buddha this is the noblest religious activity for Buddhist in which limitless merit is accumulated. Monks who have completed a period of rainy season sojourn are entitled to receive Katina Cheevara after the completion of the period successfully. In the event of a number of monks observing Vas or sojourning for the rainy season at the same place only one monk is entitled to receive Katina at that place. However, a single devotee can offer any number of robes but at different places.

In Buddha’s words all the items offered at a Katina Pinkama ceremony are equally efficacious bridges of offerings in the road to Nirvana. A number of prerequisites should be fulfilled to achieve the best results of a Katina puja. First of all every monk to whom the Katina Cheewaraya is offered should have completed the rainy seasonal sojourn in the proper way. .The Cheewaraya should be a thick robe for the wet season cut and sewn on the spot in a day and night.

Gauthama Buddha set an example to His followers by sojourning Himself during the Wassana Kalaya or the rainy season. The first “Vas” period sojourning of the Gauthama Buddha after His Enlightenment was at Baranasi Isipathanaramaya – the grove in Benaris where He first preached to His monks.

Buddha’s seventh “Vas” season is also of special significance. Gauthama Buddha decided to be of service to His mother god who was in Thauthisa or Thavathinsa. Queen Mahamaya who died seven days after giving birth to prince Siddhartha was born in the divine world called Thauthisa as a mighty god. During His sojourn in Thauthisa Buddha gave religious instructions to the gods including the mother god. He delivered Abhidharma or Transcendent doctrine. On hearing Abhidharma the mother god attained Sowan, the first of the four paths or stages leading to Nirvana.

It was on the seventh Vap Full Moon Poya Day after His Enlightenment that Buddha returned to the world of men from Thauthisa divine world. Attended by celestial beings Buddha descended to the world sown a ladder of “Sath Ruwan “– seven precious things ie. Gold, silver, pearls gems, cats eye gem, diamonds and coral, “Shad Warna” i.e. an aggregate of six colours – blue, yellow, crimson, white, red and the colour formed by the combined radiance emanated from His body and formed into a halo around Him. Thousands of Devas and Brahmas stood in the air on either side of the ladder to pay respects to the Enlightened One.

“Sahampathy Maha Brahma held the “Chathra” –parasol and god Suyama (chief god of the divine world “Yama” fanned Buddha with a Vijinipatha or Vatapotha and Pancasikika played the Veena Human beings who could not make offerings to the Exalted One in person during a period of three years were anxious to have a glance of Him. He descended followed by Sakra, Maha Brahma and Suyama. Human beings who were overwhelmed with happiness the Buddhalambana Preethiya- made it a religious festive season.

Vap Full moon Poya day is significant also in connection with the Sri Maha Bodhi. It was on a Vap Full Moon Poya day that King Devanampiyatissa sent his minister, who was also the king’s nephew to emperor Dharmasoka, as his envoy, requesting him to send a sapling of Sri Maha Bodhi to Sri Lanka. The king dispatched this envoy under admonition of Arahant Mahinda Maha Thera

Craftsmen of eighteen ranks accompanied Arahant Sanghamitta Theri who was accompanied by a number of other nuns and embarked from Thamraliththi fort to disembark in Sri Lanka a few days later. The Sri Maha Bodhi was planted in Maha Meuna Uyana on Undu Vap Full Moon Poya day.

Prince Maha Aritta who was ordained by Arahant Mahinda Maha Thera was the first Lankan to attain Arahantship.- the goal Buddhism. He held convocation of Vinaya Pitakaya. The commencement of this convocation was on a Vap Full Moon Poya day.

According to legend Mahawansa kings in Sri Lanka have patronaged Katina Cheewara Puja ceremonies and very often kings themselves had offered Katina Cheewara to the Maha Sangha on Vap Full Moon Poya days and in addition they had included various items required for the respective temples.

King Parakramabahu the Great who ruled the country from Polonnaruwa is one such monarch who played a pioneering role in the Katina Puja. He had contemplated on offering eighty Katinas in eighty different places. Collecting cotton wool, knitting and sewing had been done on the same day. The King had got “Kappiya Bhanda” or articles to be offered to Buddhist priests and had offered them to Maha Sangha. He had offered Katina to Maha Sangha annually during the period of his reign.

There is also a detail account of Katina Puja performed by king Parakramabahu the sixth in 1410 A.D. During the Kotte period Katina Cheewara offering ceremonies had been conducted in various temples such as Kotte, Kelaniya, Bellanwila and those in outstations such as Kandy, Anuradhapura and down South. He had offered Katina Cheewara and other accoutrements or articles required by Buddhist priests including Atapirikara viz. Bowl, undergarment, Single robe, double robe, girdle, knife or razor, needle and water strainer annually to three thousand four hundred and thirty two Buddhist priests in three Sinhale, viz. Ruhunu, Maya and Pihiti

There is historical evidence to the effect that King Kirthi Sri Rajasinghe of the Senkadagala Kingdom had offered Katina Cheewara to the Maha Sangha annually on Vap Full Moon Poya day.

The month of Vap is also important for farmers. It is the chief sowing season. Agricultural activities such as breaking up follow ground, ploughing and sowing take place during this month. Vap Mangula or Vap festival had been patronized by royal families. King Suddhodhana had taken Prince Siddhartha- Bodhisattva out on that day to see the ploughing festival. Nineteen Amunas had been ploughed with sixty ploughs. Bulls of best breeds, well made ploughs and yokes, driving sticks and cords were carried in carriages drawn by horses.According to Mahawansa Sinhala Kings had conducted the Vap Mangula – the ploughing festival with the highest esteem and in a grand scale. At present Vap Mangula is a national festival patronized by ministers and Parliamentarians including the President. Vap festivals are conducted not only at the national level but also provincially. In certain Vap festivals elephants are used presumably for want of strong bulls and buffaloes in sufficient number or with the intention of making the best use of elephants.